Apache Spark has been evolving at a rapid pace, including changes and additions to core APIs. Spark being an in-memory big-data processing system, memory is a critical indispensable resource for it. So, efficient usage of memory becomes very vital to it. Let’s try to find answer to following questions in this article:

What storage format did Spark use? 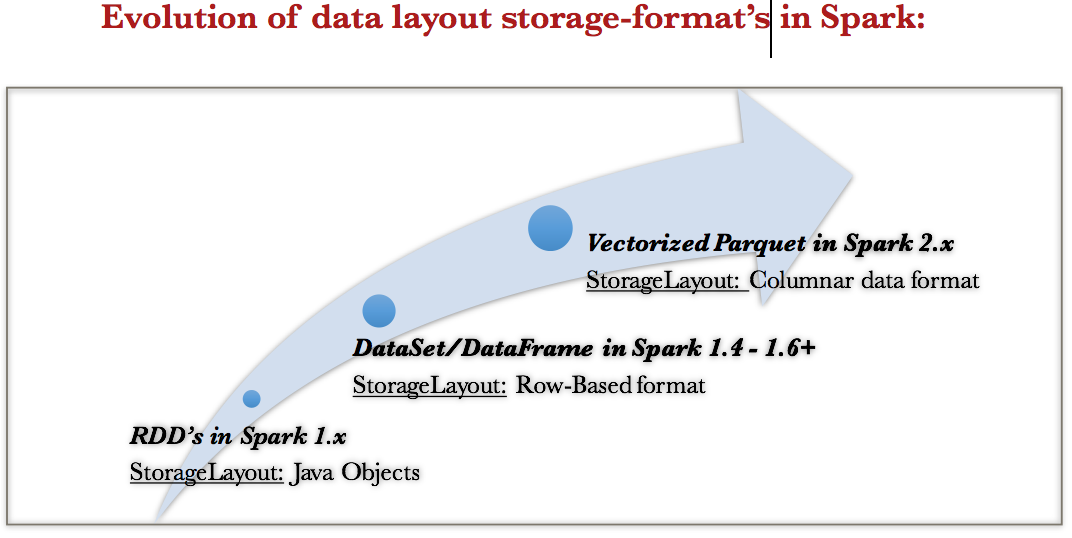 How did storage format evolve over a period of time?

The answer to this question is not only interesting but also lengthy. Let’s dive into the driving factors and the journey of how Storage formats evolved in two parts:

We cannot find the answer for this question, without diving into Project Tungsten. Just go with the flow and you’ll reason out as to why are we looking into Tungsten soon. Project Tungsten has been the largest change to Spark’s execution engine since its inception. This project has led to some fundamental changes in Spark. One such change gave birth to DataSet. Let’s start by looking at the goal of Project Tungsten.

The focus on CPU efficiency is motivated by the fact that Spark workloads are increasingly bottlenecked by CPU and memory use rather than IO and network communication. To understand this better:

First things first..We need to understand the problem with old execution engine before we think of solutions to improve efficiency. To better understand this, let’s take a simple task of filtering a stream of integers and see how spark 1.x used to interpret it. 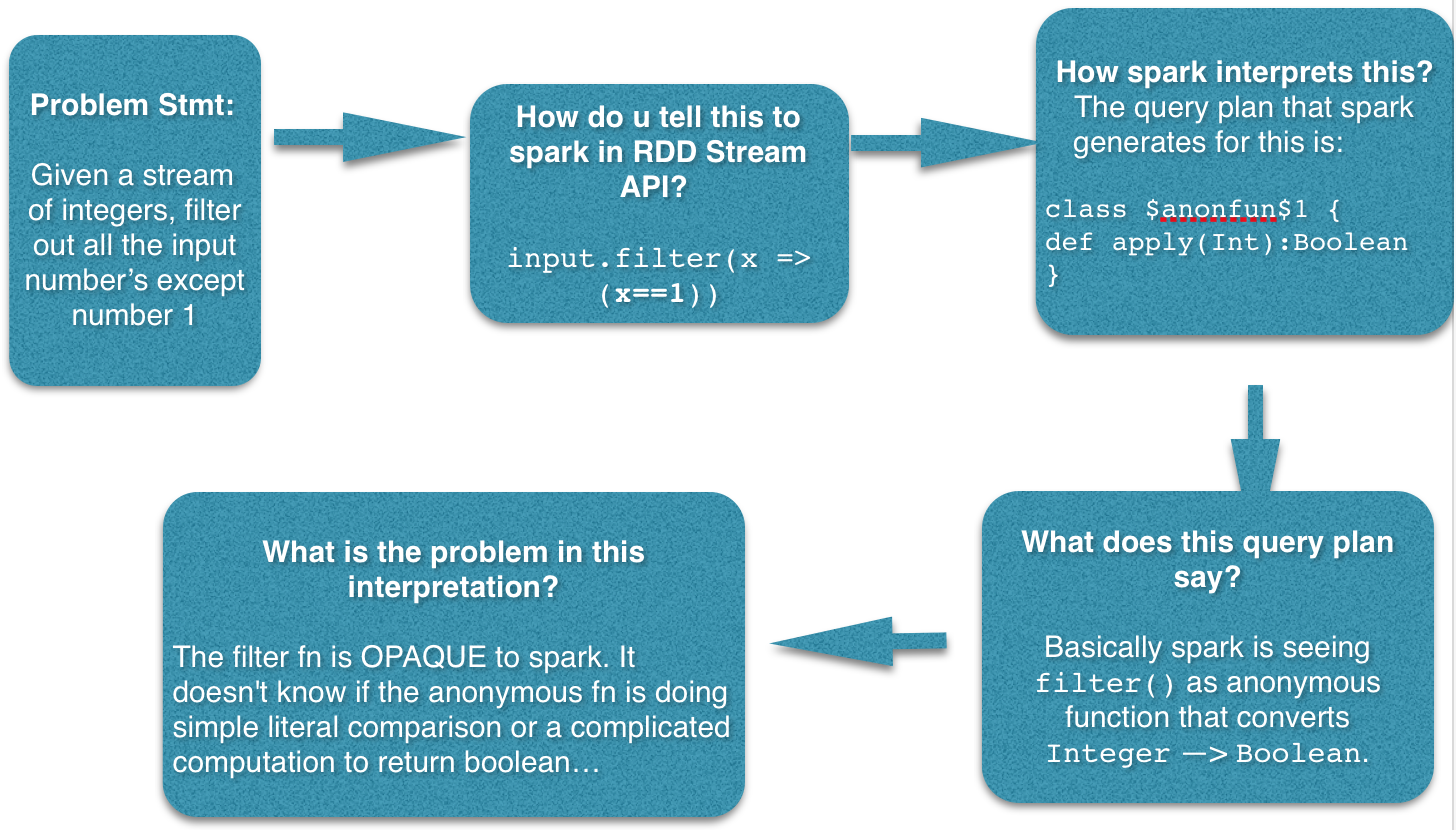 What is the problem with this query plan?

As mentioned in the picture above, Spark doesn’t know:

Because of the lack of transparency, there’s barely any scope for spark to optimise the query plan.

What transparency does spark need?

How does this transparency help Spark?

It helps spark improve performance. Its easier to illustrate it with an example. Consider joining two inputs df1 and df2. JoinCondition: column x of df1 = column y of df2.

Following figure depicts the join and its query plan that spark generates:

Because the join condition is an anonymous function (myUDF), the only way for spark to perform this join is:

How can transparency help spark improve this?

The problem in the above query was that join condition is an anonymous function. If spark is aware of the join condition and data schema [datatype of x and y columns] then spark would:

Spark tries to do everything in-memory. So, the next question is to know if there is a way to reduce memory footprint. We need to understand how is data laid out in memory for this.

How is data laid out in memory?

With RDD’s data is stored as Java Objects. There’s a whole lot of serialisation, deserialisation, hashing and object creation that happens whenever we want to perform an operation on these java objects’s and during shuffles. Apart from this Java objects have large overheads.

Should spark stop relying on JavaObjects? Why?

Ans: Java Objects have large overheads Consider a simple string “abcd”. One would think it would take about ~4bytes of memory. But in reality, a java string variable storing the value “abcd” would take 48 bytes. Its breakdown is shown in the picture below. Now, imagine the amount of large overheads a proper JavaObject like a tuple3 of (Int, String, String) shown on the right hand side of the picture below takes.

Instead of java objects, come up with a data format which is more compact and less overhead

A Dataset is a strongly-typed, immutable collection of objects with 2 important changes that spark introduced as we discussed in our action plan:

Following picture illustrates the same with an example. In this example, we took a tuple3 object (123, “data”, “bricks”) and and let’s see how its stored in this new row-format. 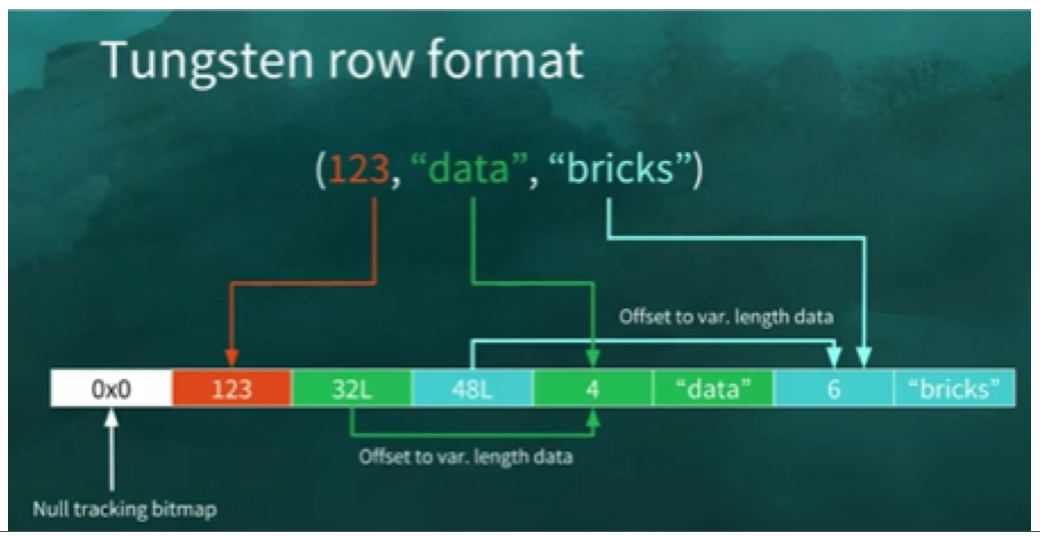 Let’s see how transformations are applied on dataset

Transformations are nothing but simple operations like filter, join, map etc which take a dataset as input and return new transformed dataset. Please find below two transformations examples:

Some more things to note on Dataset’s: 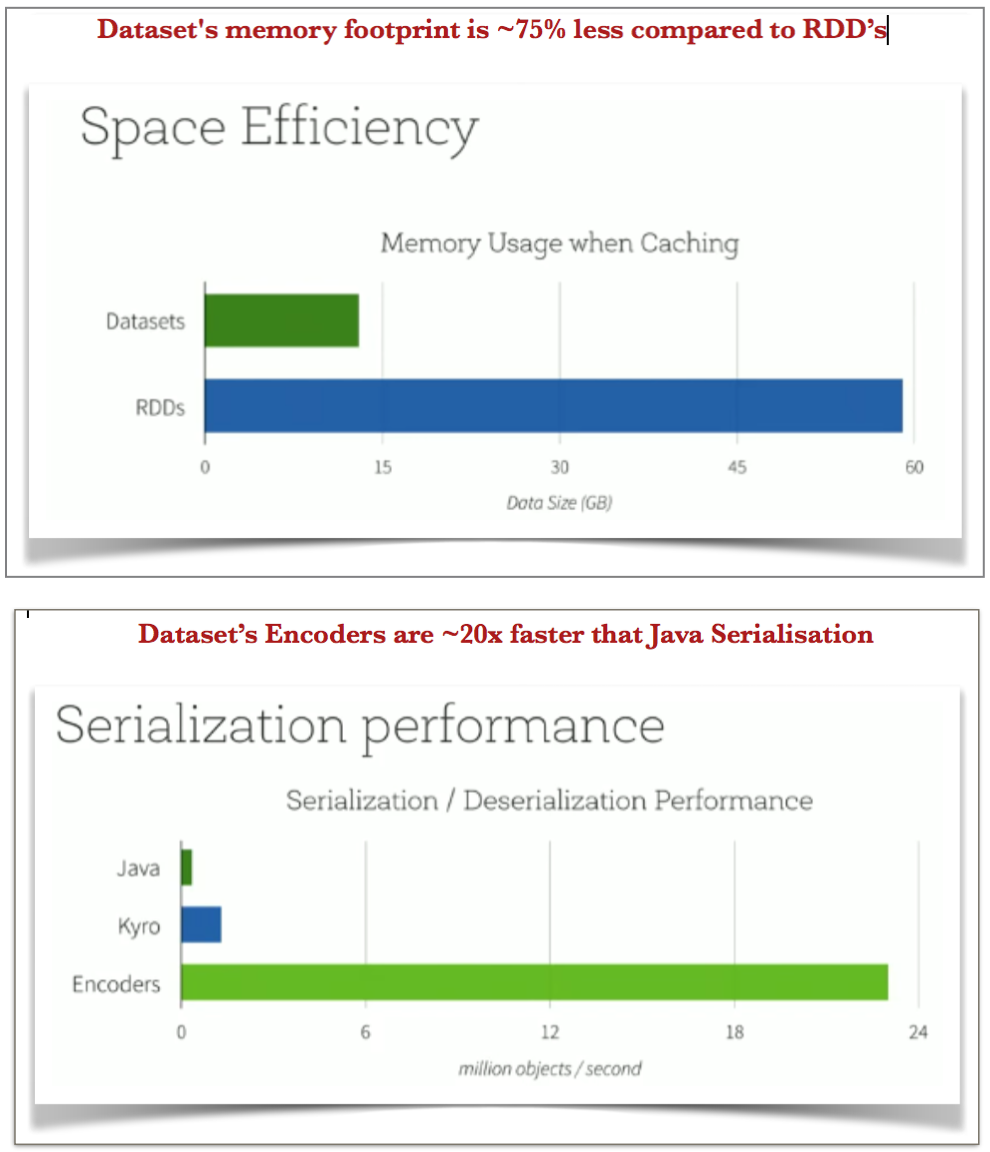 What does in-place transformation with dataset’s mean?

With RDD’s, to apply a transformation operation on data (like filter, map, groupBy, count etc), there are 3 steps:

With Dataset’s, in-Place Transformation essentially means that, we need not deserialize a dataset to apply a transformation on it. Let’s see how it happens next..

How does in-place transformation happen in DataSet/Dataframe?

Let’s see how the same old filter fn behaves now. Consider the case where we’ve to filter input by year>2015 condition in a dataframe. Note that the filter condition specified via the dataframe code df.where(df(“year” > 2015)) is not an anonymous function. Spark exactly knows which column it needs for this task and that it needs to do greater than comparison. 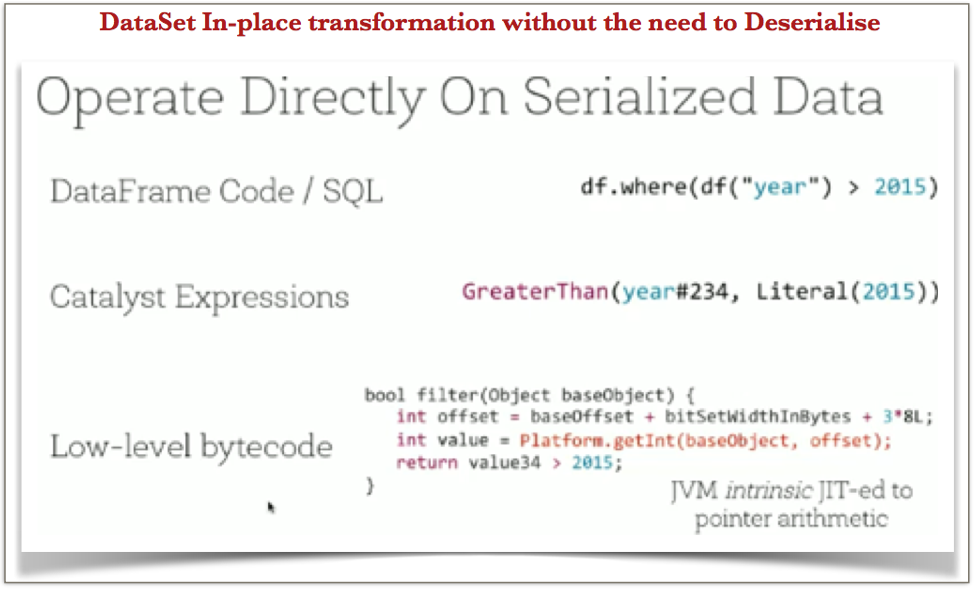 The low-level byte code generated for this query looks something like this as shown in the above figure:

Interesting things to note here is that:

This is great!! Let’s see how does in-place transformation helps in speed?

Atleast for the simple use cases..

2nd Generation Tungsten Engine tried to use some standard optimisation techniques like loop unrolling, SIMD, prefetching etc which modern compilers and CPUs apply to speed up runtime. As part of this, Spark came up with two new optimization techniques called WholeStageCodeGeneration and Vectorization (Detail of these technologies can be found here). For this spark did 2 things:

What opportunities did columnar storage open up? 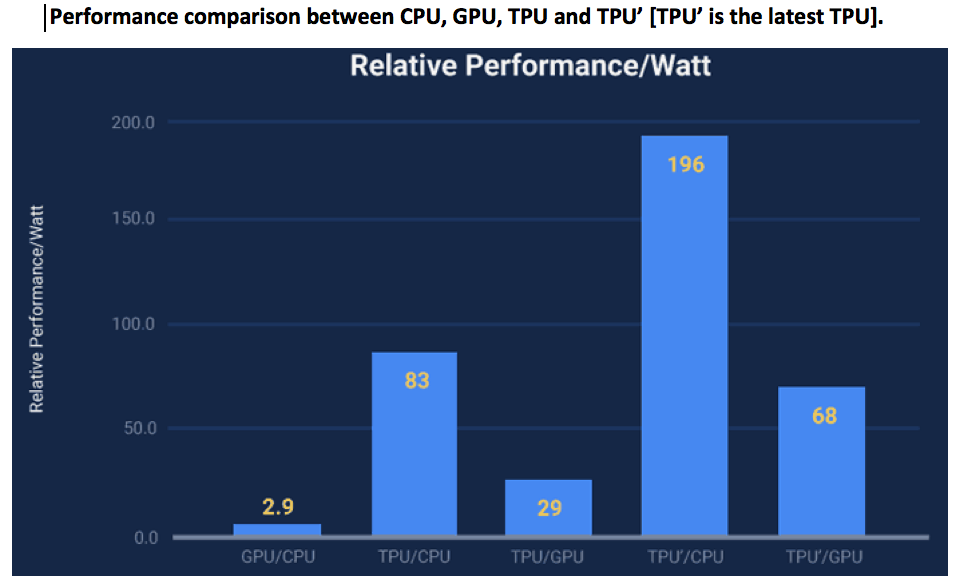