Spark 2.x had an aggressive goal to get orders of magnitude faster performance. For such an aggressive goal, traditional techniques like using a profiler to identify hotspots and shaving those hotspots is not gonna help much. Hence came forth 2nd generation Tungsten Engine with following two goals (focusing on changes in spark’s execution engine): 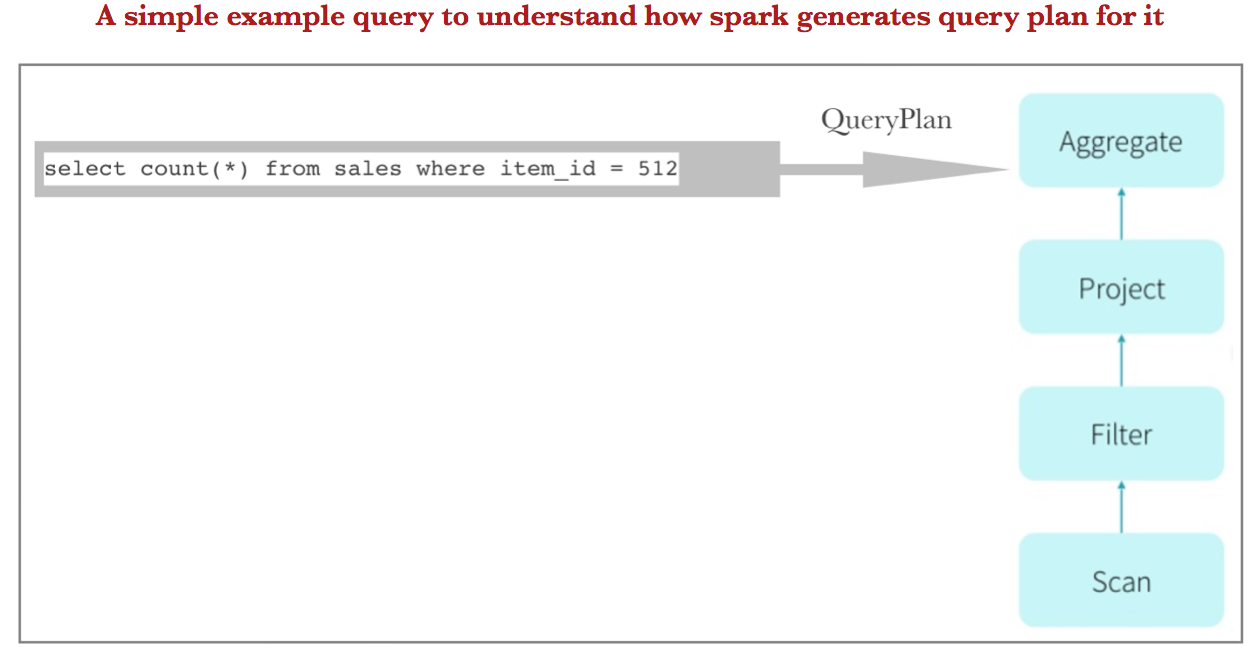 Its a very straight forward query. Basically, scan the entire sales table and outputs the items where item_id =512. The right hand side shows spark’s query plan for the same. Each of the stages shown in the query plan is an operator which performs a specific operation on the data like Filter, Count, Scan etc

How does Spark 1.x evaluate this query plan?

Spark SQL uses the traditional database technique which is called Volcano Iterator Model. This is a standard technique adapted in majority of the database systems for over 30years. As the name suggests [IteratorModel], all the operators like filter, project, scan etc implement a common iterator interface and they all generate output in a common standard output format. Query plan shown on the right side of the figure shown above is basically nothing but a list of operators chained together which are processed like this:

Too many virtual function calls

Conclusion: With VolcanoIterator Model, its difficult to get order’s of magnitude performance speed ups using the traditional profiling techniques.

Instead, let’s look bottom up..

What does look bottom-up mean?

A college freshman would implement the same query using a for-loop and if-condition like the one shown below: 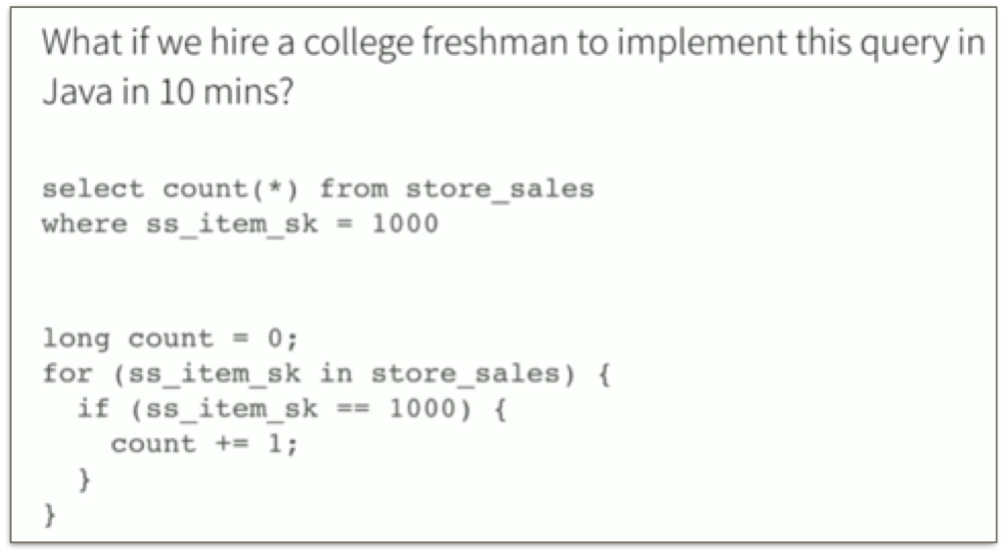 Why is the difference so huge?

College freshman hand-written code is very simple. It does exactly the work it needs to do. No virtual function calls. Data is in cpu registers and we are able to maximise the benefits of the compiler and hardware. Key thing is: Hand written code is taking advantage of all the information that is known. Its designed specifically to run that query and nothing else VS volcano model is a more generic one 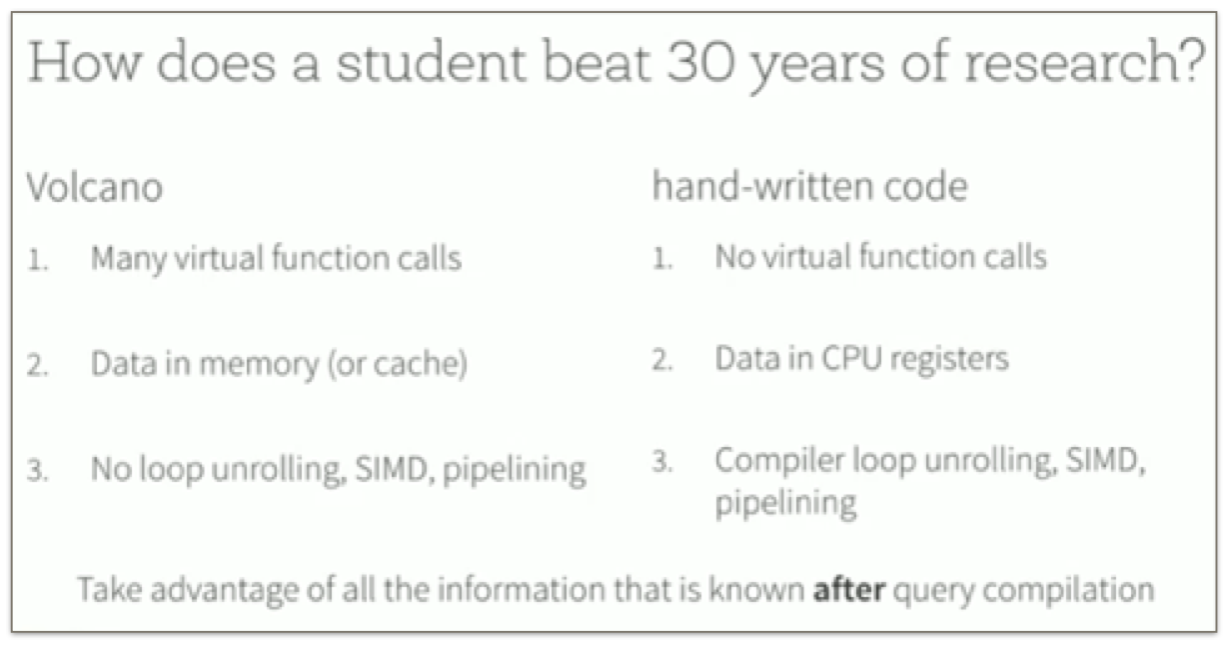 Key IDEA is to come up with an execution engine which:

Has the functionality of a general-purpose execution engine like volcano model and Perform just like a hand built system that does exactly what user wants to do.

Okay! How do we get that?

What does this mean?

Join with some filters and aggregation.

Whole-stage Code Generation works particularly well when the operations we want to do are simple. But there are cases where it is infeasible to generate code to fuse the entire query into a single function like the one’s listed below:

Is there anything that we can do to above mentioned stuff which can’t be fused together in whole-stage code-generation?

WSCG is generating an optimized query plan for user: 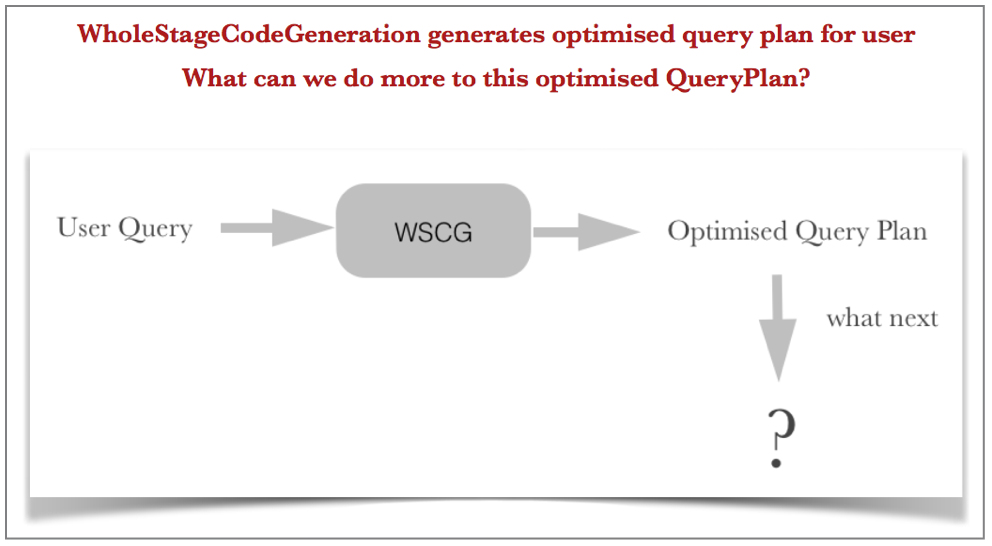 What extension can we add to this further?

This is where Goal2 comes into picture - Speed up query execution

How can we speed up?

Vectorization: What is Vector Processing?

Vector Processing is basically single instruction operating on one-dimensional arrays of data called vectors, compared to scalar processors, whose instructions operate on single data items as shown in the below picture: 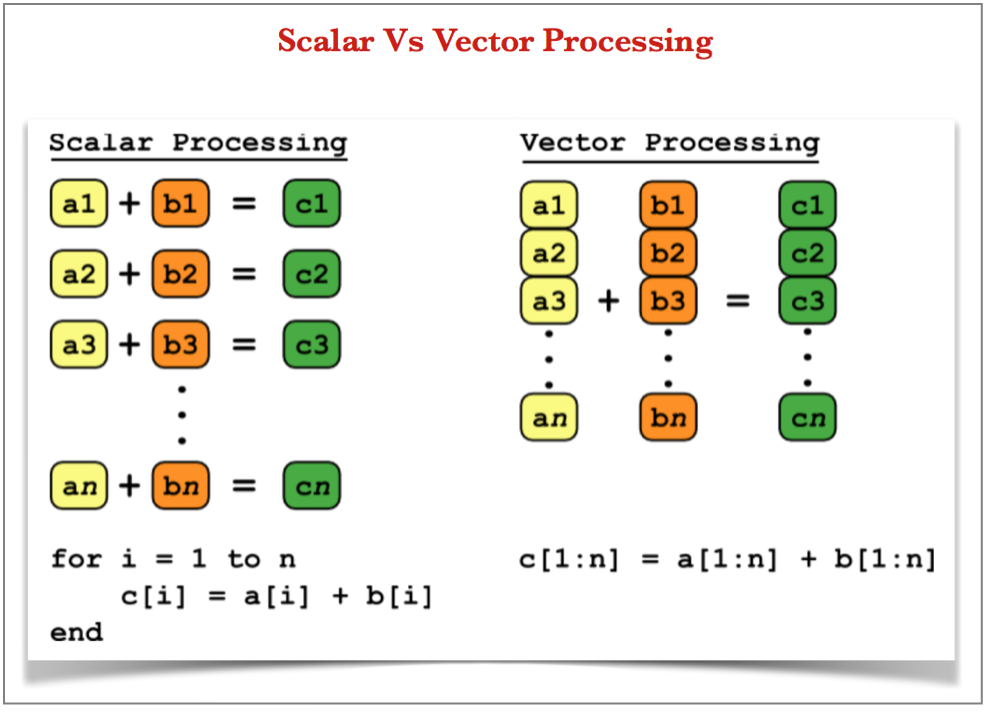 Vectorization: How did Spark adapt to Vector Processing:

Now, that we’ve seen what is Vectorization, its important to understand how to make the most out of it. This is where we reason out why spark shifted from row-based to columnar format

[Note: Feel free to skip this section if you want to jump to performace section and find out performance benchmark results]

What is critical to achieve best efficiency while adapting to vector operations?

Data Availability - All the data needed to execute an instruction should be available readily in cache. Else, it’ll lead to CPU stalling (or CPU idling).

How is data availability critical for execution speed?

To illustrate this better let’s look at two pipelines:

Following four stages of an instruction cycle are displayed in the pipelining examples shown below:

Pipeline without any CPU stall: Following picture depicts an ideal pipeline of 4 instructions where everything is beautifully falling in-place and CPU is not idled: 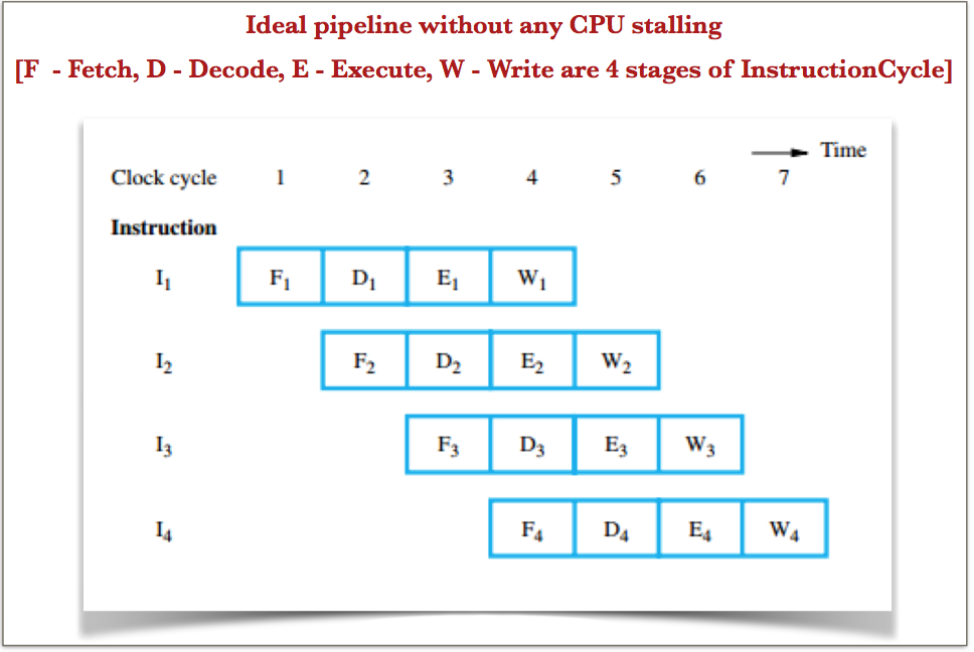 Pipeline with CPU stall: Consider the same instruction set used in the above example. What if the second instruction fetch incurs a cache miss requiring this data to be fetched from memory? This will result in quiet some cpu stalling/idling as shown in the figure below. 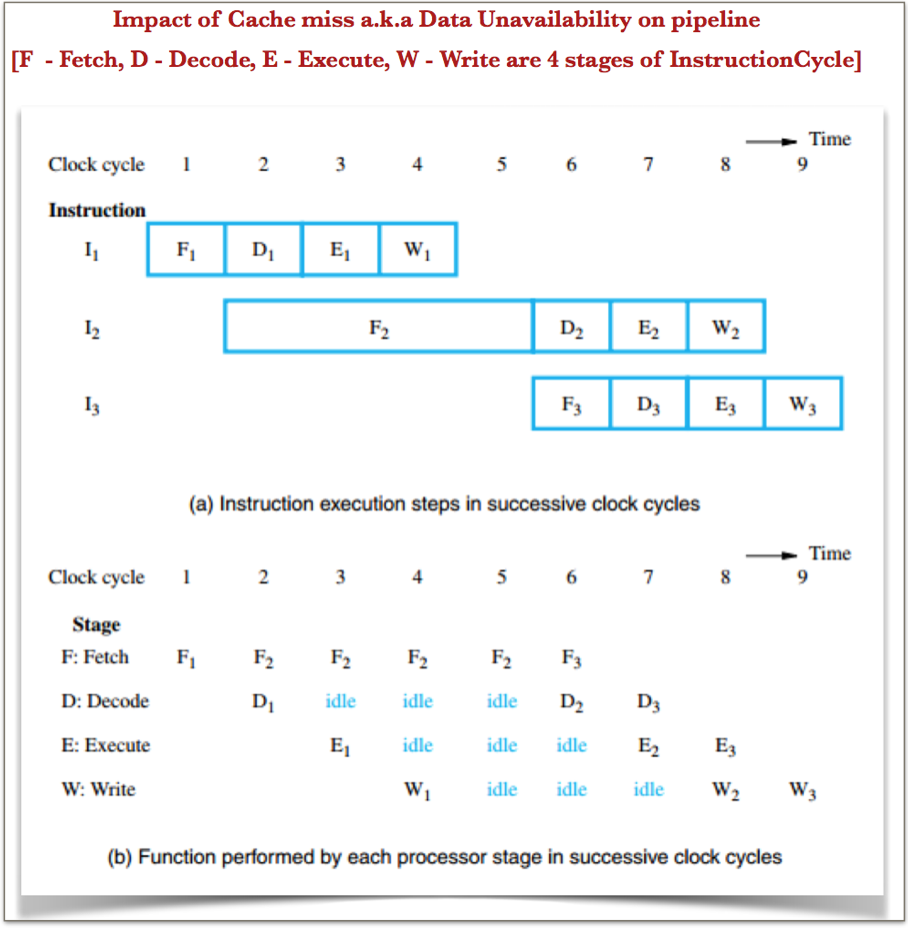 Above example clearly illustrates how data availability is very critical to performance of instruction execution.

We’ve explored following in this article:

This is additional content (optional) which complements and adds some more details on different Optimization techniques which follow this key idea to improve throughput: The key to through put is organizing code to minimize jumps and organizing data to avoid cache misses, essentially avoid stalling or idling in the pipeline and achieve instruction level parallelism (ILP).

Pipelining execution involves making sure different pipeline stages can simultaneously work on different instructions keeping dependencies among the instructions in mind to avoid stalls and result in throughput increase.

An example of how pipelining happens for a simple math operation like (x^2 + 8)/2: 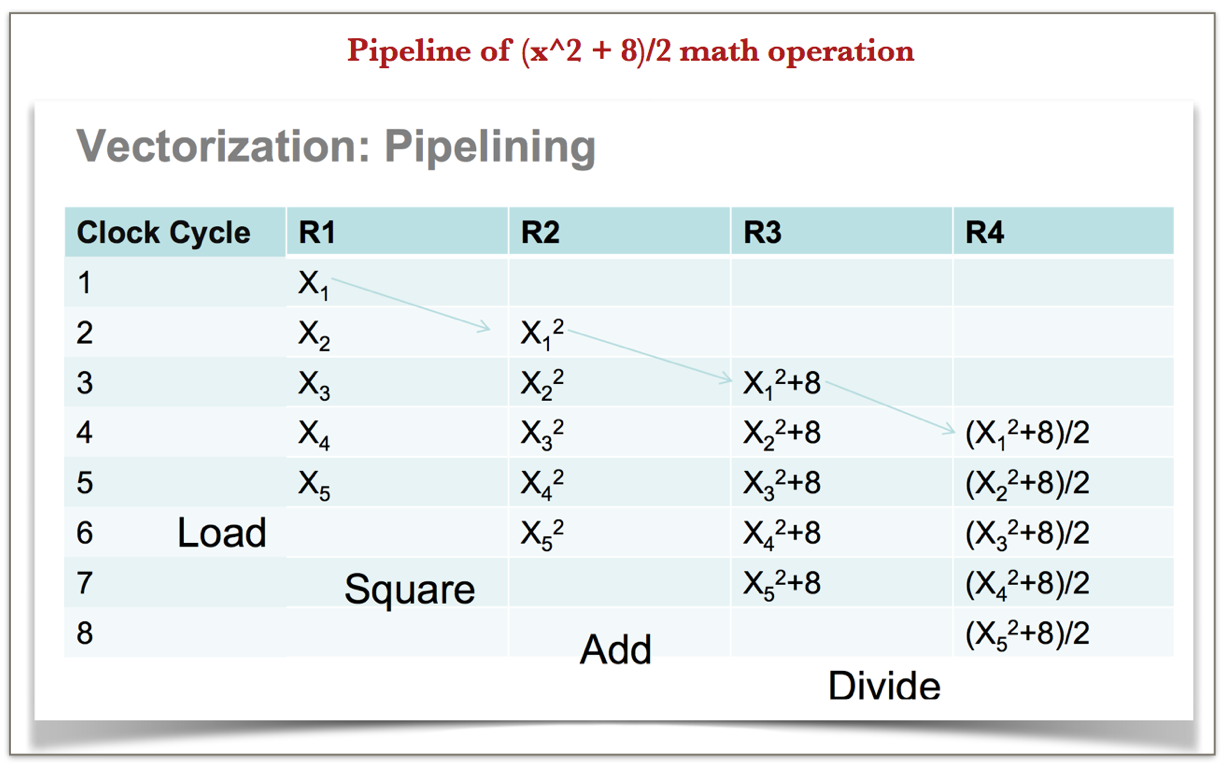 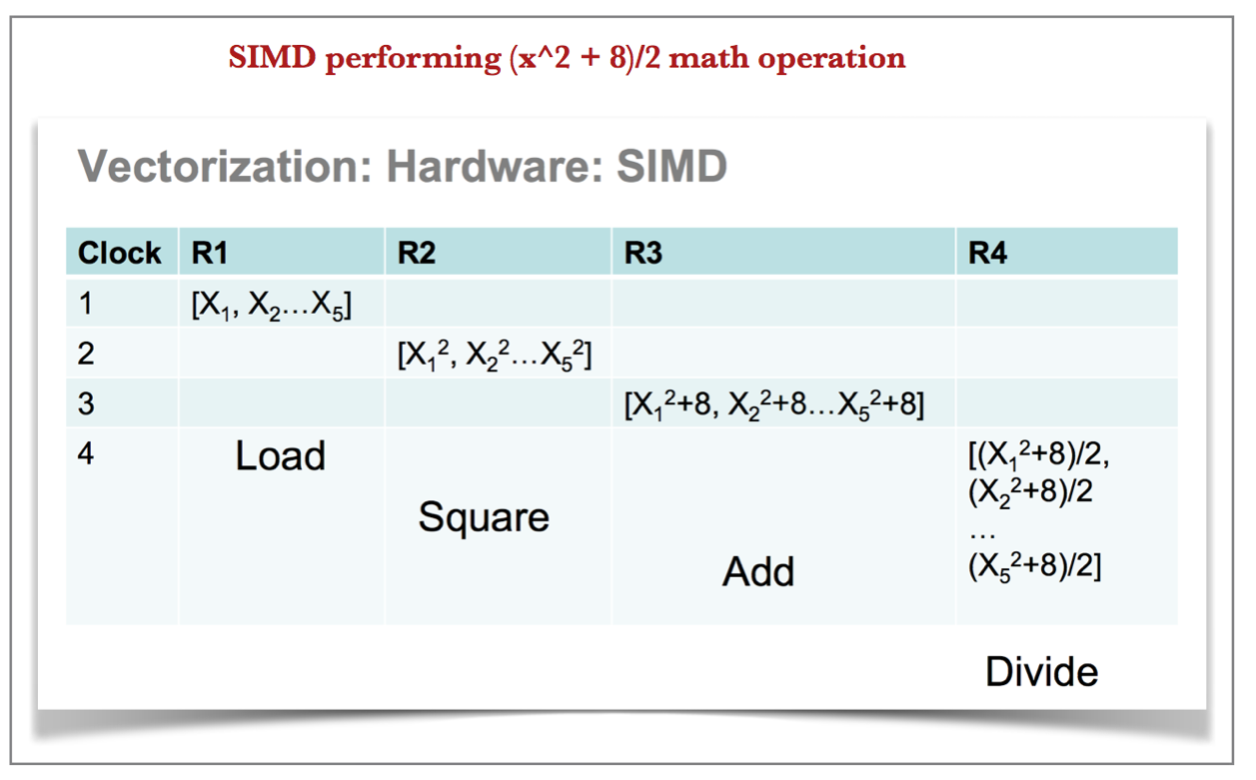 Loop pipelining allows the operations in a loop to be implemented in a concurrent manner as shown in the following figure. 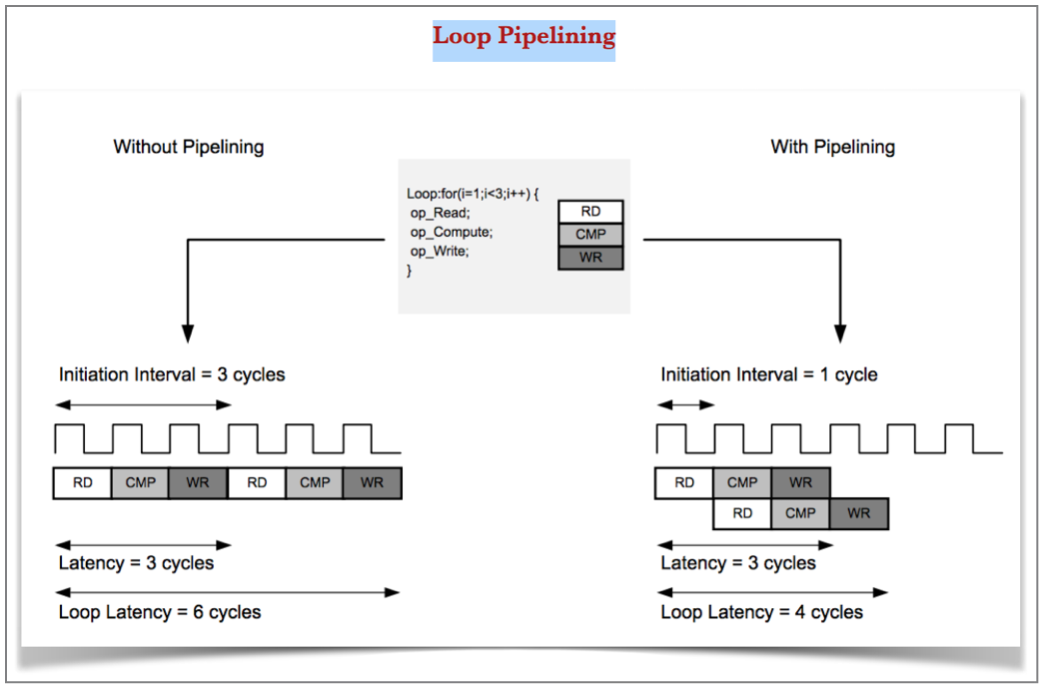 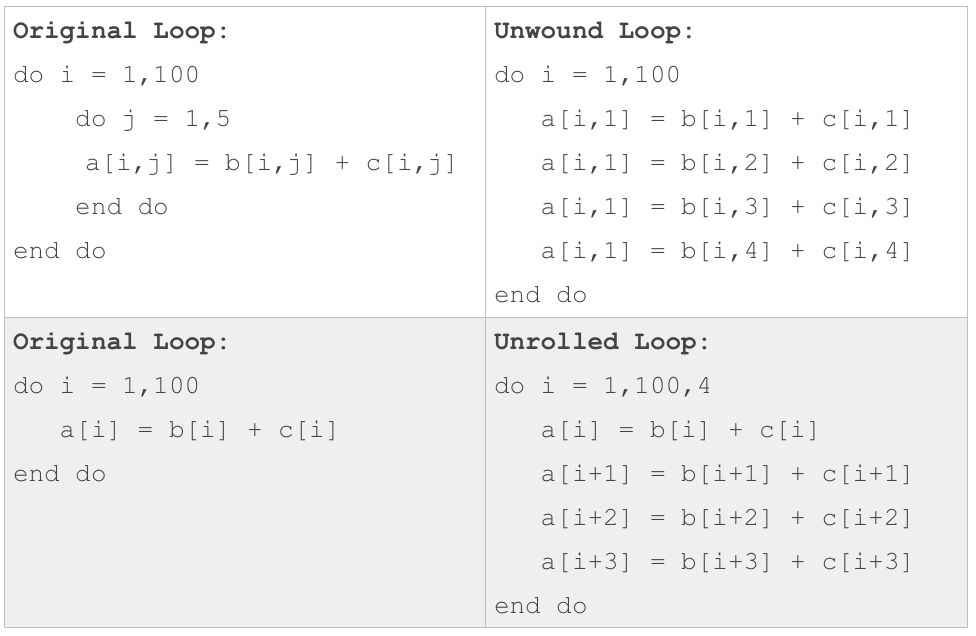